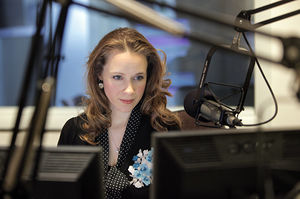 To succeed on the radio, Suzanne Nance learned to sparkle with her voice.

To succeed in life, she learned to sparkle with her personality.

You can hear her smile, which she does often.

She is an unapologetic advocate with untarnished credibility.

A soprano, Nance also maintains an active career as a performer. When she talks about Mozart or some other composer on the air, she knows what she is talking about. She sings him inside and out.

"She is fun, spicy and passionate, and she backs it up with her intellect," said Portland-based violinist Jennifer Elowitch, who also serves as artistic director of the Portland Chamber Music Festival. "You need all of that to pull off what she has done, and Suzanne's got it."

Nance, 33, breaks the mold of what we've come to expect of classical music on the airwaves. She plays all kinds of music, including contemporary music. She plays vocal music. She interviews artists in the studio, and encourages them to bring their instruments to perform over the air.

"She is not what you think of when you stereotype classical music," Elowitch said. "She is vibrant. She is female. She is beautiful. She's smart and also lots of fun."

Nance came to Portland from Philadelphia by way of Chicago. Before arriving in Maine four years ago, she balanced a career that required her to commute among three cities.

She had an apartment in Chicago, where she sang regularly, and traveled to Aspen, Colo., for a seasonal radio job. She also had a standing singing gig in Prague, which required frequent overseas travel.

It was a glamorous and exciting life, but Nance wanted one home.

"Radio for me was becoming more and more a part of my life," she said. "It was sort of like, 'I shouldn't ignore this part. I should go to it, because it's clearly a big part of what I can offer.' So I did."

She chose to do it in Maine. During her college years, Nance came to Maine as an intern for the Seal Bay Music Festival, and fell in love with the state. When the job at MPBN opened up, she applied.

This month, Nance moves her show from Bangor to MPBN's Portland studios on Marginal Way. She still will travel across the state and originate her show in Bangor and elsewhere, but Portland is her base. She just signed a lease to live in Portland's West End.

She credits Terry Gross, host of the popular radio show "Fresh Air" on WHYY in Philadelphia, for sparking her interest in broadcasting. Nance grew up in Philly and worked at WHYY. She observed Gross every day, and noted her dedication.

"She would take home probably 15 to 20 books every night and come back with 20 different books the next morning that she had digested," Nance recalled.

The lesson she learned was simple: If you are going to be the best in your field, you must fully commit to your subject.

Nance does that today. She makes room in her program for interviews, and she pays attention to the news that comes before her show. She always finds out in advance which poem Garrison Keillor is reading on "The Writer's Almanac," which immediately precedes her show at 9 a.m., so she can plan accordingly.

Her show ends at noon, but Nance works through the day. It's not unusual for her to leave the building at 7 p.m. She tries to answer every email that lands in her in-box.

"I hear from so many listeners," she said. "There are lots of lobster men and women listening to the show. There are house cleaners in Fort Kent. They clean on Tuesdays and listen to the show. I can visualize their faces. It's mothers. It's business men and women.

"It's such a diverse group."

Nance sees her role as something akin to a museum curator. She interprets music for a broad audience, creating context.

Most important, she wants her enthusiasm to come through.

Charles Beck, who oversees the programming and daily operations of MPBN's radio and TV operations, said Nance succeeds because she's smart and honest. Listeners like and trust her.

"I have people come up to me all the time and say, 'Wherever she came from, make sure she doesn't leave,'" Beck said. "She does appeal to just about everybody, and she enjoys tremendous loyalty. She appeals to a lot of people, but doesn't alienate anybody."

Nance did not grow up with classical music. Singing offered a means to lighten heavy times at home.

She always knew she would be a singer, although her family did not. When she told her mom that she was cast in the lead role of the school musical, her mother said, "You know you have to sing?"

"I said, 'Actually I am a singer, it turns out.' So I knew before anybody else did," she said.

But Nance never expected to sing classical music or opera. She assumed she would do musical theater. In college, the course work for a music major required intense study of classical music. She fell in love and committed herself. She sings in seven languages.

She has a knack for putting people at ease, which serves her well on stage, Scott said. Because of her engaging personality, she helps an audience relax, which makes it easier for them to enjoy the music.

"She has a gracious and easy presence, which draws the audience to her and to the music. Once the listener is relaxed, they can fully engage in the experience," Scott said.

Alice Kornhauser, director of marketing and communications for the Portland Symphony Orchestra, appreciates that Nance is an equal opportunity programmer. She pays attention to the PSO, but not at the expense of smaller music presenters in all quarters of Maine.

"She reflects the community in her programming, which I think not everybody does, and it's certainly not a requirement. She doesn't really distinguish between the big organizations and the smaller organization," Kornhauser said. "She's just interested in the music. If there is good music happening, she will investigate it and promote it."

Nance says she is simply doing her job. She estimates that she logs about 30,000 miles on her car annually -- the vast majority within Maine -- to perform and to hear music, and to visit with listeners.

She feels honored to do her job in a place she loves as much as she loves Maine.

"I am blown away by what happens in this state musically, and blown away by the artists that come here," she said. "There are not enough nights in the week."