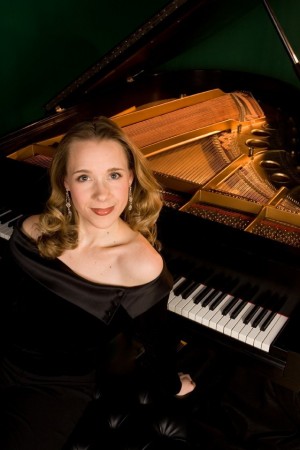 Her earliest musical memory: singing the National Anthem for a motley crowd at a Little League game. But in truth, Suzanne Nance was performing for her mother. “My mother worked really hard, didn’t have much, was going it alone. So I loved to entertain her, sing for her, tell her lots of stories.” Excellent training for an opera singer who now performs oversized tales for audiences worldwide. Suzanne sings in an expressive soprano voice often called “crystalline,” a pretty compliment that overlooks the volcanic power of her tone. Imagine crystal rinsed in scalding water. Crystal dipped in lava. Now we’re getting somewhere.

Though she dotes on a mini poodle called Coco Chanel — a diva dog if ever there was one — Suzanne is the anti-diva, an endearing young woman who easily laughs at herself. She once sang Monteverdi’s aria “Addio Roma” with tears streaming down her face, prompting wild bravas from the Italian audience. “What they didn’t know,” she confesses, “is that I had a terrible case of pinkeye.”

It’s her speaking voice, however, that Mainers more readily recognize. As music director of the Maine Public Broadcasting Network, Suzanne hosts the weekday classical music show, bringing magnificent music into cars and kitchens and offices statewide. With a decidedly female sensibility, she offers achingly human tidbits about conductors and composers — their tattered affairs, towering ambitions, beloved children. On a recent show — themed “Gentlemen” — she concluded with Strauss’ Le Bourgeois Gentilhomme, playfully advising listeners to “call a gentleman in your own life.” Armed with incontestable bona fides, Suzanne freely salts the canon with wit and whimsy, which may explain her growing audience, now an estimated fifty thousand strong.

Originally from Philadelphia, Suzanne always yearned to live in Maine. She once asked a college boyfriend, whom she was visiting in New Hampshire, to drive her over the border, where she “danced under the WELCOME sign.” Once she finally got here, she embraced Maine in a big way. “I had this fantasy about Maine and its people, and it came true.”

A relentless advocate for music, she travels the state as host, audience, and sometime performer in concerts from York to Fort Kent. She’s the energy behind Maine Stage, a weekly rebroadcast of concerts around Maine, and as creator of MBPN TV’s Maine Arts series, she broadcast last year’s astonishing Poetry Out Loud competition, sponsored by the Maine Arts Commission, in which high school students declaim famous poems from memory.

Her workday typically runs about ten hours. Then she returns home to practice her vocals in the cheerful domestic chaos of her fiancé and his three children. She’s looking ahead to 2014, when she will tour the world with La Voix Humaine, a one-woman opera by Francis Poulenc. The tour will be carefully arranged around her radio schedule, for she is smitten with her audience, which she imagines includes everyone from fishermen to financiers — and her mother. Completing a very full circle, she observes, “I’m still choosing music I think my mother would like.”